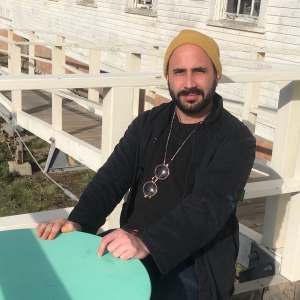 José Joaquín Figueroa is an Oakland based artist born in Caracas, Venezuela. Figueroa uses postmodern strategies to create artworks that reflect on the fragility of fleeting moments, the complications of interlayered identities and the impossibility of a single perspective. Figueroa has exhibited at Southern Exposure, Berkeley Art Museum and Embark Gallery, all in the bay area; Museo de Arte Contemporaneo, Bogotá, Colombia; Longwood Arts Project in New York, among others. He attended Skowhegan School for Painting and Sculpture in 2009, received his B.F.A in arts from the Cooper Union in 2014 and his M.F.A. from U.C Berkeley in 2016. He is currently an Affiliate Artist at Headlands Center for the Arts.