gallery Interview with artist Zulfikar Ali Bhutto: Expanding on their most recent project, a multimedia performance titled “Tomorrow We Inherit the Earth: The Queer Intifada,” to be shown at CounterPulse, San Francisco in June 2019

Co-produced with CounterPulse Theater, Tomorrow We Inherit the Earth: The Queer Intifada, a multimedia performance piece that dives into the junction of horror, speculative fiction and storytelling. Inspired by historical events in the Muslim world and Islamophobia in modern day America and Europe, this collaboratively devised performance merges together fashion, music, video, movement and poetry to reveal a queer and Muslim centered future. Via Broadway World 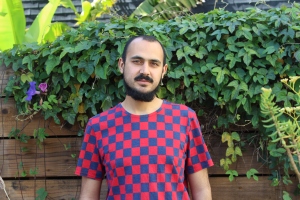 Zulfikar Ali Bhutto is a visual and performance artist, zombie drag queen – who goes by the alias Faluda Islam – as well as curator of mixed Pakistani, Lebanese and Iranian descent. He is based in San Francisco, California where he received an MFA in Studio Art at the San Francisco Art Institute in 2016.

Bhutto’s work delves deep into a futurist imagining of South Asia, the Middle East and the larger Muslim world, through a research based process excavating archives from disparate sources. He takes on histories of revolution, resistance and resilience and queers them using his body as a filter through a multi-media practice based primarily in the realm of future story telling.

Bhutto was curatorial resident at SOMArts Cultural Center where he co-curated, The Third Muslim: Queer and Trans Muslim Narratives of Resistance and Resilience. He has shown in galleries, museums and theaters globally, including The de Young and Asian Art Museums in San Francisco, The Queens Museum and Flux Gallery in New York City, the Fundación Gilberto Alzate Avendaño, Bogotá, Colombia and at the Beirut Art Fair. He has spoken extensively on the intersections of faith, radical thought and futurity at Columbia University, UC Berkeley, UC Santa Barbara and The California College of the Arts. Today he works as a teaching artist and community arts facilitator.