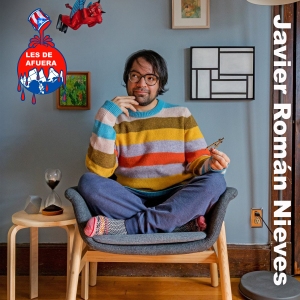 Javier A. Román Nieves is an artist, writer, and natural resource manager. He obtained a first master’s degree in architecture from the University of Puerto Rico in 2004, and a second one from the Yale School of the Environment in 2019. Early on, his focus in philosophy and critical theory broadened the scope of his design practice into the arts. During this period, Javier led an alter-ego life as project manager for the Puerto Rico Public Art Project during the day, and guerrilla artist at night, an unconventional practice complemented by a steady output of articles and essays that have continued to this very day. His architectural practice came to an indefinite hiatus in Mexico City, with the onset of the Great Recession. After this, Javier returned to San Juan, where he also taught history and fundamentals of design while becoming editor-in-chief for the Professional Association of Architects of Puerto Rico. At this time his artistic output peaked with a first solo show at the Puerto Rico Museum of Contemporary Art. However, repeated disappointment with his guild’s concessions to political influence and with the art scene would cement Javier’s crossover to conservation soon after. He began serving as a copywriter and content producer for the Puerto Rico Conservation Trust before formalizing his career shift with a return to grad school at Yale. Now based in New Haven, Connecticut, Javier combines skills from the human dimensions of environmental management, ecosystem conservation, and GIS mapping into a unique practice between land management and environmental communications. Javier does place-based publishing under his independent label Roqué-Stahl Ltd. He still likes to photograph birds and stars.

Les De Afuera (2020) is a compendium of interviews with Puerto Rican artists who have made their life across the globe produced by Cranium Corporation.

Directed and Produced by artist and curator Á.R. Vázquez-Concepción, for Cranium Corporation