gallery Correspondencia/Correspondence, an online exhibition based on the latest show curated by Marcela Pardo Ariza and Á.R. Vázquez-Concepción at CTRL+SHFT Collective in Oakland, held from June 8—24, 2016

Correspondence forges us into hybrid multiplexed beings —we are commingled by it. It is proof of our multiple bonds and kinships.

Also, like a rearview mirror correspondence enables more effective navigation of our perceptions, of ourselves and the complexities that constitute our realities.

The fact is, in spite of the injustices registered by history, we all exist bound together in one way or another, for one reason or another, by a seemingly unbreakable, timeless, and infinite thread of biological and cultural correspondence —from sexual reproduction to mechanical probes sent into the far reaches of space as harbingers of human science.

A case in point is every artist included in this online exhibition, a byproduct of a show held at the CTRL+SHFT Collective in Oakland between June 8 – 24, 2016.

Each of the participants produced a work made of single or multiple letter-size sheets of paper. They were sent to the curators by way of email or personal delivery, and were printed locally. In each participation, some sent from faraway parts of the world and diverse cultural archives, the artist expresses a reflection on letter writing, correspondence, the postal service, and/or exchanging stories. The complete lineup included fifty-one visual artists:

Included as part of the exhibition was a media presentation of a selection of poems curated by writer Nick Johnson.

By Kar Johnson, we read: after In Search of the Miraculous by Bas Jan Ader, Memento, and Us Bench.

By Chloé Veylit: an average distance, Charity, During a Commercial Break, from ‘vertere,’ to turn, and vowels.

By Colin Partch: a series of three poems each titled Epistles.

By MK Chavez: Difficult Child, Hazmat, How to Write a Love Letter, Letters From an Animal, and The Occultism of Color.

In tandem with the visual art showcase and the poetry selection a film cycle was assembled showing Leche (1998) directed by Naomi Uman (30 min.) — a black and white film which examines details of the lives of a rural Mexican family; and Mala Leche (1998) also directed by Naomi Uman (47 min.) — a film that examines details of the life of one family, living on an isolated dairy ranch in Central Mexico, and then follows members of the same family to California’s agricultural Central Valley where they continue to work with dairy cattle; and concluding the cycle was My Blueberry Nights (2007), directed by Wong Kar-Wai (95 min.) — A film that depicts a young woman taking a soul-searching journey across the United States to resolve her questions about love while encountering a series of offbeat characters along the way. The films by Naomi Uman are courtesy of the filmmaker and were selected from the collection of the Canyon Film Foundation under the kind advisement of Seth Mitter.

Below is a selection of works by the artists from the list above. Stay tuned for a limited edition hard copy edition of the entire exhibition content, including those works that are extended pieces of writing, coming later this year!

Here are some installation shots of the space at CTRL+SHFT: 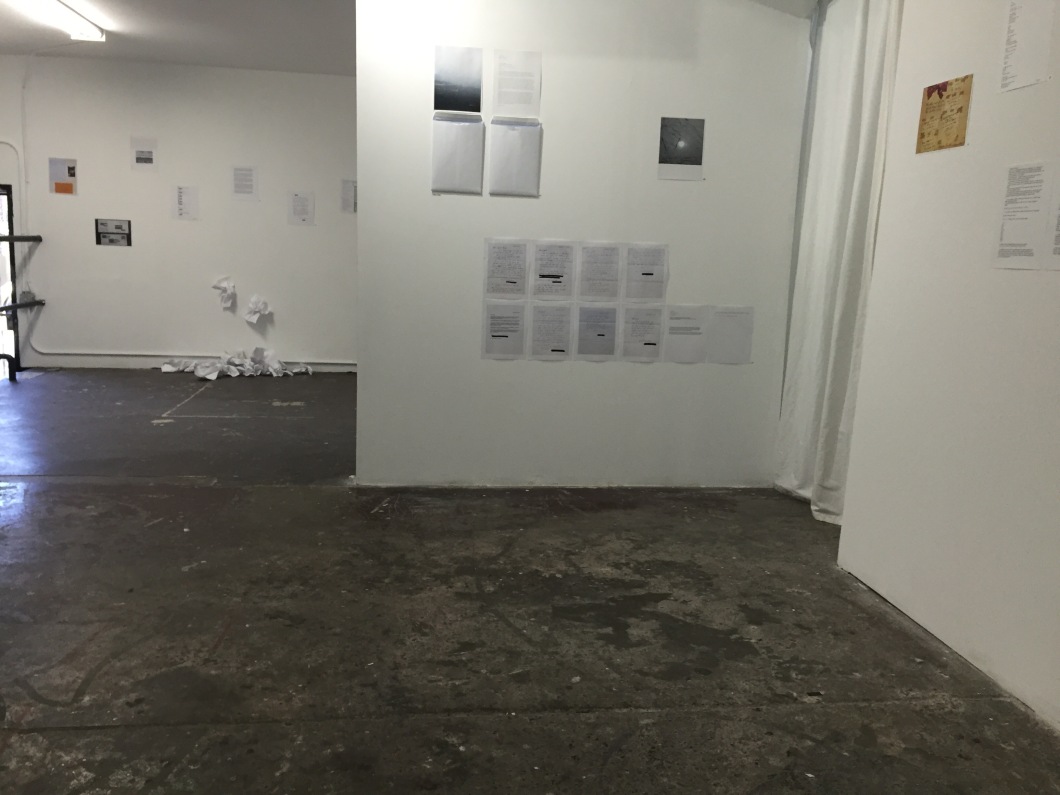